Australian Muslim Dzafer Nuhic’s hobbies include douching, being a douchebag, and general douchebaggery. The wannabe bro posts all sorts of pictures of him and his Islamic friends trying to look tough, and even posts pictures of his gradually-becoming-less-scrawny-but-still-not-impressive arms at the gym. Watching Nuhic claim he’s ripped is like watching someone claim Islam is the religion of peace. On that note, Nuhic is quite adept at showcasing the true peacefulness of his religion. Recently, he found some counterjihad pages on Facebook and proceeded to have a meltdown, both on the pages’ walls and on his own. 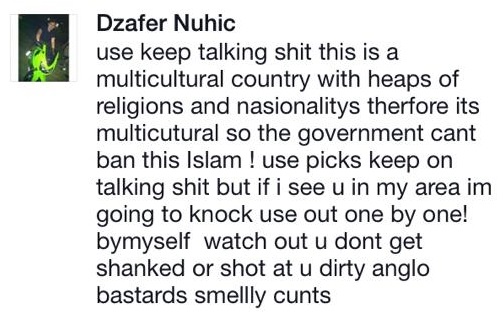 As you can see, the wannabe tough guy doesn’t shy away from making threats. Of course, Nuhic would probably cower and run with his tail between his legs in the unfortunate event of an actual confrontation. As for different nationalities – it isn’t national origin that encourages people to try to molest children under the guise of marriage.

Now he’s just gone off the rails. Leave it to a Muslim to imply Jewish involvement in something Jews had nothing to do with. Also, I don’t think he understands that “you’s” (what he’s trying to say when he says “use”) is grammatically incorrect. Then again, when has a foamer ever had good grammar?