Posted by Your Daily Muslim on March 3, 2014 in Anti-LGBT, Canada, Men, Sexism 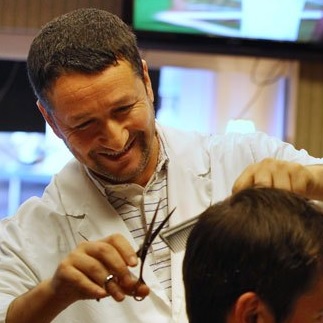 As a general rule, it’s best to keep Muslims away from sharp objects. However, the citizens of Toronto, Ontario (Canadia) weren’t able to prevent Muslim Omar Mahrouk from getting his hands on a pair of scissors and running a barbershop. Now, I know what you’re gonna say – he’s a male hairdresser, so he must be gay, right? Well, Mahrouk’s orientation is unknown, but there’s more evidence to suggest he’s actually a closet case: he refuses to touch women. In fact, he’s gone so far as to refuse to cut women’s hair because sharia forbids him from interacting with non-mahram (related) women.

In the US, many are offended when stores refuse to serve them due to the owner’s religious beliefs. In Canadia, however, there hasn’t been much outrage over Mahrouk’s refusal to cut a woman’s hair. The woman, Faith McGregor, whose appearance and demand for a men’s haircut would have her pegged for a lesbian (no pun intended), just wanted a haircut. It is unknown whether her orientation factored into Mahrouk’s unwillingness to cut her hair, but now she is out for justice.

McGregor filed a complaint against the barbershop that refused to serve her through the Human Rights Tribunal of Ontario. Mahrouk hired a lawyer (…I thought Muslims hated Jews?) and said via the lawyer that being forced to cut a woman’s hair would be a violation of his religious freedom. McGregor’s case is awaiting review. Mahrouk declined to comment on why he lives in the west and runs a publicly-accessible business if he hates our values so much.