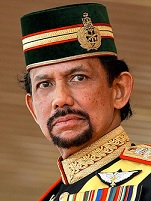 Last October, Bolkiah announced that Brunei would begin instituting sharia punishments – including flogging, amputation, and stoning – over a gradual period. Like most insecure men, he also had quite a bit to say about people who mocked him on the internet and in the press: “They [critics] cannot be allowed to continue committing these insults, but if there are elements which allow them to be brought to court, then the first phase of implementing the Sharia Penal Code Order in April will be very relevant to them.” Basically, considering what sharia entails, he’s threatening his critics that he’ll abuse the law to have them tortured and maimed. How tolerant. How peaceful. How mature.

Bolkiah also apparently has no problem getting it up despite his religion’s objections. In 1997, numerous American models were invited to stay at his palace for “intellectual conversation” for Bolkiah’s guests. Of course, everyone knows models are lacking in intellect (see Miss Teen South Carolina), so we all know what they were really hired for. The models were allegedly held against their will and ordered to have sex with numerous men. After one got in touch with the US Embassy, they were rescued, but Bolkiah and his family members, many of whom also took part in the abuse, were not charged as they were heads of state.

Bolkiah also claimed that Islamic law would be a “firewall” against globalization, not realizing the irony of referencing a modern technology in an allegorical context to describe something that hasn’t advanced past the 7th century. Brunei’s sharia penal code is set to be phased in starting April 1st. Unfortunately, it’s no April Fool’s joke.