Posted by Your Daily Muslim on March 5, 2014 in Amputations & Beheadings, Anti-LGBT, Foamers, Sexism, The Gambia, Violence Against Women, Women

Sarjo Jatta loves being oppressed, as you can see by the “luv the veil” she wrote on this selfie.

“Real Muslims don’t do such deeds like being gays or lesbians or other bad stuff.”

Sarjo “Emprezzbizz” Jatta is one pissed-off foamer. Upon seeing the YDM Facebook page, she immediately drew her fangs. Jatta, who resides in the Gambia, had quite a bit to say before admitting I was right about Islamic rulings on female genital mutilation. As it turns out, counterjihadists often know Islam better than Muslims do – and this wannabe empress is proof of that.

Let’s dive right into the foam! 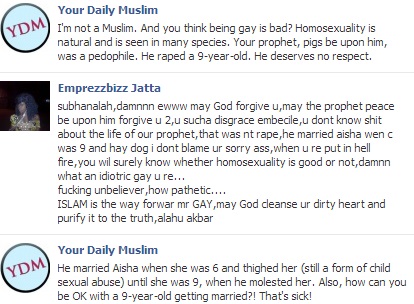 LOL. Jatta claims female genital mutilation isn’t forced on anyone, but the sheikhs I mentioned have stated that it is sunnah and obligatory.

Two weeks after the publication of this piece, Jatta returned to the YDm Facebook page to spew another heaping dose of foam.

Yes, this Islamic idiot really thinks that if there are gay people, everyone would be gay and the human race would die off.