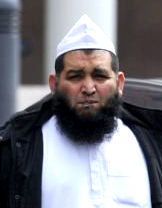 When Muslims aren’t trying to wage jihad against the west, they’re trying to wage jihad against prepubescent girls’ vaginas. Such is the case with UK-residing Muslim Suleman Maknojioa. A Qur’an teacher who provided in-home lessons to young Muslim children, the hefty Maknojioa is nothing if not devout. Of course, part of being a devout Muslim means following the prophet’s example… and groping little girls.

A mother signed her three children up for lessons with Maknojioa while she was out of the house. At first, nothing was cause for alarm. But soon, Maknojioa started showing favoritism toward the 11-year-old girl and acting dismissively toward the 13-year-old boy and his 7-year-old brother. Maknojioa sat next to the children as they studied the Qur’an, providing insight into all of its passages of child molestation and slaughter. The fat Muslim then tried to get physical with the 11-year-old girl, who was too afraid to do anything about it. “I did not want it, but I was too afraid to say something,” the girl said. “He would put his hand under my headscarf on my chest and he would squeeze.” Maknojioa also caressed the girl’s thighs

When the issue was brought to the attention of the girl’s mother, Maknojioa’s ass immediately ended up in court. He was convicted, but won’t have to serve a day behind bars – because his wife doesn’t speak English and thus can’t effectively work, and he was the only provider for the family (Maknojioa and his wife have six children.) Now, Maknojioa’s on benefits since he is no longer allowed to teach Qur’an lessons. If an English Defence League member who was the sole provider for his family spraypainted a pig on a mosque, he’d certainly get jail time regardless of how many people depended on him.

Maknojioa is a hafiz, or scholar who has memorized the Qur’an. His defense attorney, also a Muslim, got him off (no pun intended) by saying “this is a man who doesn’t pose any risk of harm to his [six] children.” Uhh, clearly the attorney forgot about the harm he was causing to other people’s children.