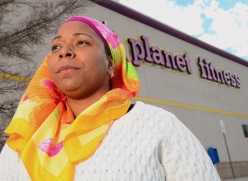 Tarainia McDaniel is the proud owner of two chins

As someone who spent a considerable amount of time this past evening doing deadlifts, I hate the chain of gyms called Planet Fitness. More commonly referred to as Planet Fatness or Hamplanet Fitness by those who actually lift, this joke of a gym chain often has free pizza and donuts for its members. Oh, and it gets even worse – they have a “lunk alarm” in their facilities which goes off whenever someone grunts too loudly or drops their weights. In other words, they reward being a lazy hamplanet and punish serious lifters. The chain caters to fatties who want to be told that pigging out is just as good as working out. Today’s daily Muslim was a Planet Fatness member. Meet the overweight Tarainia (not to be confused with tarantula) McDaniel. Before I begin, I’ve gotta give props to her for making an effort to lose weight, however short-lived that effort may have been.

McDaniel decided to transfer to a new Planet Fatness location, possibly because of its superior exercise equipment, location, and/or expanded junk food menu. However, a buffet at Planet Fatness wasn’t in this Muslimah’s future. When she signed up, she wore the hijab, or headbag. The gym forbids wearing head coverings, as some can get caught in various machines. With a loose garment like a hijab, plenty of dangers abound, and thus McDaniel was asked to remove the seventh-century accessory while lifting.

Of course, as a Muslim, McDaniel just couldn’t comply with the completely unfair rules the kuffar were trying to impose on her. What did she do? She filed a LOLsuit against the gym under the New Mexico Human Rights Act and the Unfair Practices Act, claiming she had been denied service because of her religion. Well, it’s not her religion that caused her to be denied entry, it’s her unwillingness to comply with 21st-century rules because of her 7th-century beliefs. She had every chance to take off the headbag and dress like a normal person. But noooooooope, Islam is absurdly inflexible. McDaniel also alleged that her African-American race may have had something to do with the gym’s refusal to allow her to work out. However, plenty of other African-Americans work out at that location without issue.

The outcome of McDaniel’s lawsuit remains to be seen. If this case goes in McDaniel’s favor, it could set a harmful precedent in terms of businesses having to allow otherwise impermissible forms of attire due to outlandish claims of religious obligation. However, if it goes in Planet Fatness’ favor, they won’t be out the unspecified amount of money McDaniel is suing them for. As someone who lifts 5 or 6 days a week, I would love to see the Planet Fatness chain fail because it’s an effing joke. But I’ll be damned if it’s whining Muslims that cause that failure.