One cannot expect a calm reaction from Muslims when faced with a simple phrase like “F**k Allah and Muhammad.” Pakistani Muslims Armaghan Binehsan and Fozail Mehsud Ahmed demonstrated their peaceful nature when faced with a page of that name.

Before we dive into the foam, let’s look into these Muslims, both of whom are estimated to be in their late teens. Binehsan posts periodic selfies and expresses an interest in anime. Fairly normal for a teenage boy, even a Muslim one. His Facebook profile has no indications of a proclivity for violence or for Islamic extremism.

Here’s the foam this dastardly duo unleashed upon the Facebook page “F**k Allah and Muhammad.” I reckon these two have forgotten the various islamic prohibitions against premarital sex, particularly sodomy. There are so many things wrong with the statements made by these Muslims I’m just going to let your jaw drop without further exposition. 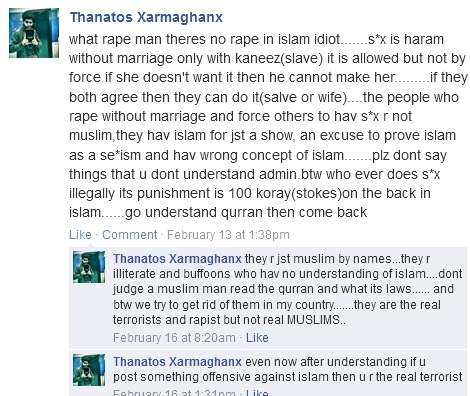