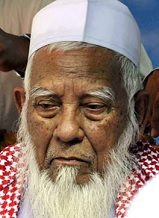 As we learned in part 1, Bangladeshi Islamist group Hefajat-e-Islam’s leader Shah Ahmad Shafi is at least a millennium behind the times. The white-haired Muslim hasn’t let arthritis slow him down – he’s still actively preaching and issuing fatwas, the majority of which go against the values of every secular individual on the planet.

In 1971, Shafi formed a paramilitary group, Mujahid Bahini, to oppose the liberation of Bangladesh. Despite having picked the wrong side, Shafi survived the war and managed to find people who enjoyed the 7th century as much as he did.

Most of Shafi’s Islamist career has been spent as a sheikh and an allama (Islamic scholar.) As such, he is a learned authority on Islam’s teachings. According to him, women should not leave the house and should not receive beyond a 4th-grade education. Why? Because it will lead them to disregard of their bizarre headbanging rituals and to getting laid. “Why are you sending your daughters to work in garment factories?” Shafi asked his followers during a speech. “She goes to work after Fajr at 7/8:00am and does not come back even at 8/10/12 at night… You do not know which man she is hanging out with. You do not know how much zina [fornication] she is getting involved in. Through zina, she is earning money, which does not bring prosperity.” Remember, Shafi has studied Islam’s holy texts and believes this is the best way to uphold their teachings. Once again, we can see how Islam is truly compatible with any society that strongly values gender equality…

“We are Muslims; we have no conflict with anybody,” Shafi recently stated. “But the persons, who are living in this country of Allah, and taking different facilities from Him, cannot live in His country.” By “persons,” he and his followers meant “atheists.” Another member of Shafi’s Hefajat-e-Islam group openly said that no atheist could live in Bangladesh, and called for stricter blasphemy laws to protect the dignity of Islam’s pedophile prophet, pigs be upon him.

Shafi also issued a fatwa against atheist bloggers in Bangladesh, replete with a cryptic threat of violent backlash. Considering Bangladesh’s Muslim majority, those bloggers are brave and deserve commendation, not condemnation. “The current government is implementing its long-term plan, which was made by the advice of the leftist atheist intellectuals, to wipe out Islam from Bangladesh.” The fatwa stated. “Recently, the so called bloggers, young infidels, are insulting Allah and prophet Muhammad in their blogs. They are freely writing and publishing their imaginary vulgar comments and conversations on Allah and prophet Muhammad. One blogger wrote that Allah is everywhere so he is also inside the toilet.” Well, yeah, that totally makes sense. Either Allah is everywhere or he isn’t. Muslims, it’s time for an answer – are we pissing on Allah every time we go to the bathroom? Also, Shafi’s opposition to freedom of expression is typical of Muslims, who generally become rabid at the slightest criticism of their ideology.

Other things Shafi criticized in his fatwa were the government’s increasing secularism (because there totally aren’t any non-Muslims in Bangladesh) and the activities of atheists. Shafi condemned: “Continuous free mixing [between genders], dancing, sex, obscenity, drinking alcohol, smoking marijuana, and anti-social and illegal activities… Muslim women’s dress (burka and jilbab) were described as hotel prostitutes’ clothing.” As is common for Muslims, he basically opposes anything fun. However, the atheists were wrong on one thing as well – Muslim women’s dress is more Halloween than hooker…