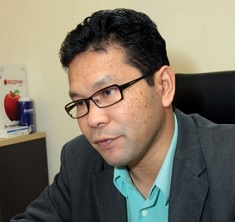 Muslims love violence. The Qur’an, with its commands to massacre infidels (among other groups), provides ample evidence of this. In Muslim Malaysia, that love of all things brutal is rearing its ugly head – in the medical field. Dr. Mohammed Fauzi Abdul Rani, the dean of the International Islamic University Malaysia Kulliyyah of Medicine, has clearly forgotten the Hippocratic Oath of “do no harm” he took when he became a doctor. He, and many others in Malaysia, are now demanding to enforce sharia punishments (hudud) on thieves as a sort of, uhh, medical treatment. For those unfamiliar with the sharia punishment for theft, it involves cutting off a hand.

The Kulliyyah of Medicine, which teaches medical science to students based on Islamic teachings and values, allegedly promotes values of “peace,” “compassion,” and “moderation.” Clearly its dean is not with the program… or (more likely) maybe those words are just taqiyya and the students are being taught how to cut hands off. When the secular Malaysian Medical Association threatened to fire Islamic doctors who performed hudud amputations, Rani (and numerous other Muslims) began foaming: “The ethics and the [secular] law are manmade, whereas the Islamic ruling is from Allah. As a Muslim doctor, I am a Muslim first. At the moment, the fact that sharia law has not been fully implemented has made it compulsory on me to make it happen…”

Rani commented that Islamic doctors will cut off hands “in the most humane manner possible.” Clearly the concept of irony is lost on this Muslim. Malaysia has parallel legal systems; one secular and one Islamic (sharia.) Rani stated that Muslim doctors are obliged to cut off a hand of those sentenced by the sharia courts, as it is “mandated” by sharia. Unfortunately, Muslims don’t understand that sharia is a bunch of seventh-century barbarism masked in religious language, and thus they continue to stringently abide by it. Take, for example, this quote from Rani: “Hudud laws… are divinely ordained and Muslims are in no position to negate them.”

As for the aforementioned Hippocratic Oath, Rani said that Muslim doctors were doing no harm to someone who had been convicted by a sharia court. This is in line with the Islamic belief that receiving physical punishment for one’s actions is a form of atonement. Tell me again how this, as said by Rani, sounds like doing no harm: “Technically, the amputation of thief’s hand should be conducted in a way not to harm his or her life. Threat to his or her life could be due to blood loss, infection and other comorbidities. Excessive blood loss can be prevented by identifying two main arteries supplying blood to the hands. Infection should be prevented by safeguarding hygiene prior, during and after the procedure. Comorbidities should be addressed by having a thorough medical check-up and optimization prior to the event. Also, the technique of the amputation should guarantee safe healing of the stump and retained integrity of remaining bones.” Gee, I wonder how the problem of other comorbidities could be solved… maybe by not following seventh-century mandates from a pedophile and his fellow madmen? Apparently that idea is far too brilliant for the Islamic mind to comprehend.