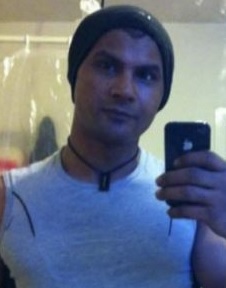 Ahmed al-Khatib enjoys taking selfies with his iPhone, but killed his wife for being “too westernized”…

Syrian Muslim Ahmed al-Khatib moved to the UK to start a new life… but brought his seventh-century beliefs with him. al-Khatib’s much younger wife, Rania Alayed, came with him. Unlike her husband, Alayed began to integrate into the UK culture, and even had friends who were both non-Muslim and of the opposite sex (gasp), neither of which were acceptable to the devout (and clearly overly jealous) al-Khatib.

al-Khatib feared his younger, infinitely more attractive wife would leave him to be with someone who actually treated her right. How did the Muslim react? Did he try to be a better husband? Nope; instead he chose to be a widower. When Alayed went to al-Khatib’s brother’s house to drop the couple’s three children off, she didn’t know she’d be leaving stuffed inside a suitcase.

After dropping the children off, Alayed and al-Khatib remained at al-Khatib’s brother’s house. That’s when al-Khatib, who claimed he was “possessed by a spirit [likely a jinn]” pushed his wife, causing her to hit her head on the way down. The impact was fatal. al-Khatib and his brother stuffed Alayed’s corpse into a suitcase and dumped the body, which has yet to be found.

Aside from Alayed’s western friends, al-Khatib had been infuriated by his wife’s attempts to find an escape from her marriage. These efforts included contacting police and a lawyer. Alayed had even told people she lived “in fear of her husband” and believed he might try to kill her. According to the prosecution in the case, Alayed’s “westernization” was one of the main factors that led al-Khatib to kill her.

Rania Alayed is the latest in a long line of Islamic “honor” killings inspired by the religion’s barbaric teachings. To read about other honor killings, visit the Honor Killings category. I’ll let CSI Miami’s Horatio Caine conclude this one: