Posted by Your Daily Muslim on May 30, 2014 in Men, Suicide Bombers, Syria, Terror-Related, Terrorists, United States 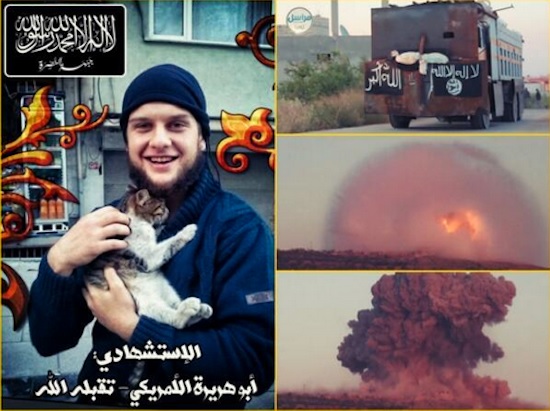 Poor cat, getting held by a terrorist…

When young American men don’t get laid, they do one of four things: 1) use their hand; 2) become Bronies; 3) go on killing sprees allegedly because of being rejected; or 4) convert to Islam and blow themselves up. American Muslim Abu Hurayra al-Amriki (real name Moner Mohammad Abu Salha) chose #4. To accomplish his task and receive virgins, everlasting servant boys and booze in jannat al-firdaus, al-Amriki traveled to Syria and joined up with the Jabhat al-Nusra jihadist group.

The jihadists immediately put their willing volunteer to use. They picked a target in Idlib province, a government-controlled site they wanted to liberate (read: detonate.) He and a couple other jihadists loaded up a truck with explosives. He then drove the jihadmobile to its – and his – final destination. It is unknown how many were killed, but there was a huge explosion.

al-Amriki was the first American citizen to carry out a “martyrdom operation” in Syria. Unfortunately, given the groundswell of support for the jihad over there, many more Muslims are likely to join him.