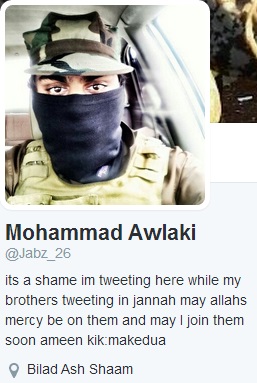 Well, this one will certainly raise some eyebrows. Many leftists and other appeasers think that Muslims born and raised in the west are normal, that they just happen to believe in Islam. This one should rectify those errant notions. Meet UK-born 22-year-old Muslim Ismail Jabbar, former House of Fraser intern, social media aficionado… and bloodthirsty jihadist currently fighting in Syria to establish an Islamic state.

Jabbar (not to be confused with Jabba), whose family is of Pakistani heritage, went to Syria in 2013 to wage jihad. He has since survived many battles against Syrian government forces, whom he considers kuffar (infidels.) One of his favorite hobbies is beheading infidels, as he outlined on his ask.fm account. He has used various assumed names (kunyas) both on the battlefield and online:

Speaking of killing kuffar, the follower of the religion of peace has done exactly that: 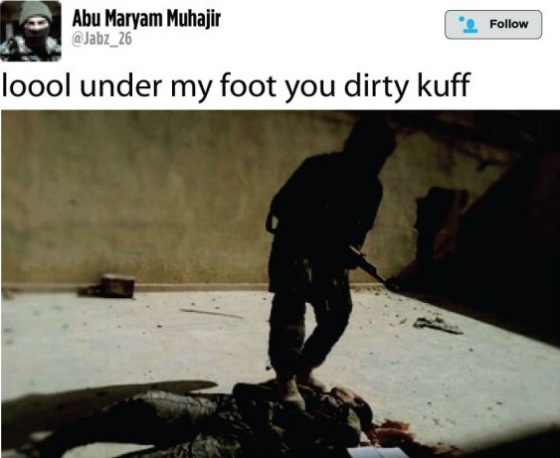 Jabbar has spoken of Islamic jihad rising within the west:

Now it gets even more twisted. This is a person who was born and raised in the UK, around western people and influences. Yet here he is, talking about how Allah doubly rewards his followers who kill Jews and Christians:

How did he go from being believed to be an everyday UK Muslim to killing infidels? Simple: he read the hate manual known as the Qur’an, which inspires Muslims to “fight [infidels] until fitna is no more and religion is for Allah.” Despite having been raised in the west with all its liberties and comforts, Jabbar’s religion alone is what turned him into a monster. This is what Islam does to people. It is not a religion of peace.

Here‘s another compilation of totally peaceful tweets and ask.fm posts made by Jabbar.

Looting corpses? Turning tricks? Not sure to which he’s referring…

Here’s what Jabbar had to say about Muslims who don’t follow their religion’s teachings, in other words, moderate Muslims:

Moderate Muslims are often scared into silence by those less tolerant than they. Some groups even face persecution by dominant Islamic groups, like the generally peaceful Ahmadis in Bangladesh who are being persecuted by the Sunnis.