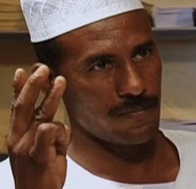 By now, you’ve probably heard about the plight of Meriam Yahya Ibrahim Ishag, the Sudanese Christian woman who was arrested and sentenced to lashing and death for adultery and apostasy – because she married a fellow Christian. The Sudanese government recorded Ishag as being a Muslim because Islam was her father’s religion, though she was raised in her mother’s Christian faith. Ishag was arrested when her marriage to a non-Muslim was discovered. She and her husband already had one child, and she was pregnant with a second. Instead of being able to give birth surrounded by family, she was held behind bars for the final part of her pregnancy.

Amnesty International created a petition demanding the Sudanese government release her. Seemingly capitulating to international pressure, the government said she would be released, but has apparently reneged. Her husband has been fighting for his wife’s freedom – but her brother, Al Samani al Hadi Mohamed Abdullah, hasn’t.

Abdullah has taken sibling rivalry a little too far, expressing support for his sister’s impending execution: “It’s one of two; if she repents and returns to our Islamic faith and to the embrace of our family then we are her family and she is ours. But if she refuses, she should be executed.” It is unknown how Abdullah ended up being a crazed Muslim when his father allowed Ishag to be raised outside Islam. However, Abdullah’s message clearly shows the tolerance of Islam – he’s willing to see his own sister hang to appease his psychotic imaginary friend. Islam has the death penalty for apostasy, yet both Muslims and their idiot leftist supporters say that Islam allows for personal freedom. “Be a Muslim or die” isn’t something I’d consider to be freedom at all.

The Sudanese government has stated they will give Ishag two years after her birth before they execute her. Numerous NGOs have condemned Sudan for this appalling barbarism, but that hasn’t deterred the devout followers of Muhammad, pigs be upon him. A little humanity is too much to ask of Muslims.