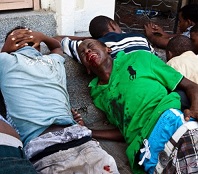 Islam’s religious leaders are supposed to be paragons of Islamic values. Most do a fairly good job of it, including Kenyan madrassa (Islamic school) teacher Saidi Sheikh Amin. Amin taught his students valuable lessons about their faith, including that they should fight the unbelievers until fitna (temptation/disbelief) is no more and religion is for Allah (Qur. 8:39.) How did his students plan on applying his teachings to their lives? They traveled to Somalia to train with jihadist group al-Shabaab, the group responsible for the Westgate mall attack of 2013.

Four of Amin’s students returned from their jihad camp and began telling others they should go. Amin heard the call of jihad in his heart and realized it was the correct thing to do in order to follow his religion fully. Thus, he and his students planned to make another journey to Somalia to get their holy war on. However, Kenyan authorities had been monitoring the returning students, claiming they had been “radicalized.” Well, duh, they spend all day reading a hate book, what do you expect them to turn out like?

Authorities raided Amin’s mosque, Masjid Shuhadaa, and associated madrassa and arrested him and the four students. The other pupils, who were being indoctrinated in hatred by the remaining teachers and religious figures, were not detained. Kenyan authorities are now actively working to profile potential jihadists at madrassas. However, their efforts will prove futile unless the source of the extremist ideology, the Qur’an, is removed.