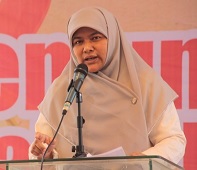 It wears a thick cloak and speaks with a voice of dread. Its presence is shrouded in an austere gloom. It is… Indonesian Islamic scholar Ratu Erma Rahmayanti. An outspoken supporter of Islamist group Hizb ut-Tahrir, Rahmayanti uses her academic “credentials” (read: studying the same stupid fairytale for years on end) to impress her fellow brainwashing victims.

In a recent speech, Rahmayanti lashed out at capitalism. Though sharia is neither capitalist nor socialist, Rahmayanti believes that today’s brand of capitalism flourishing throughout the west is harmful to the Muslim ummah. “In modern capitalist society, the dignity of women is measured by money instead of devotion,” Rahmayanti stated. Clearly she hasn’t seen Keeping Up With the Kardashians. Cash doesn’t make you any less trash. And neither does devotion to Islam; in fact, based on the women featured on this site, I’d say devotion turns women into terrible and completely undignified people. However, to someone like Rahmayanti who is without a doubt jealous of more attractive, liberated western women, capitalism is the enemy because it enables women to feel the kind of empowerment her religion denies her.

At a Hizb ut-Tahrir-led rally against the Miss World pageant due to its alleged immodesty, Rahmayanti yet again stood up for her oppressors. Wearing what can best be described as an oversized gunnysack, the Muslimah spoke to an all-female audience about how jealous she is of the contestants- I mean, she spoke about how the Miss World contestant is for sluts, and other similar rhetoric.

Rahmayanti is in favor of instating an Islamic caliphate. In the caliphate, sharia is the law of the land. You’d think a woman with a modicum of education would recognize that she is a victim of oppression and abandon the ideology that keeps her mentally (and fashionably) shackled, but Rahmayanti still clings to her delusion of an invisible sky-demon named Allah and his pedophile prophet, Muhammad.