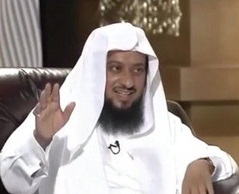 Wearing bedsheets is all the rage in Saudi Arabia.

Few things in recent memory have been more abysmal than Brazil’s 7-1 defeat at the World Cup this year. However, one event that transpired as a result makes the crushing loss seem like a minor fail by comparison. Saudi sheikh Saad al-Duraihim was watching the match and immediately formed a hypothesis about Brazil’s defeat: they lost because the team and their fans were allegedly “naked” for showing their stomachs.

“Brazil made ​​the World Cup on empty stomachs and naked bodies, this was a penalty,” the sheikh wrote on Twitter. Of course, this defeat was an alleged manipulation from the invisible, allegedly omnipotent psychopath Allah, who cares so much that a few soccer players and fans showed their midriffs. You know, because an omnipotent being that created the universe and all life would totally give a shit about the result of a sporting event. However, we’re dealing with Muslims here, so logic be damned! Everything is the doing of Allah.

al-Duraihim is also an outspoken supporter of Palestine’s jihad against Israel. This is what the totally peaceful sheikh thinks of the Jewish state: “You will not find such an affront [to Allah]!” He has also prayed for Allah to grant Palestinians “victory” over Israel. In other words, he wants to see a beacon of progress be reduced to ruins by seventh-century savages.

“The slogan of Arab and Islamic countries now is ‘be who you are, even if you’re a demon, but do not be proud of your religion, for doing so makes you the enemy!'” al-Duraihim tweeted. Apparently he thinks that Islamic hellholes are too westernized. The civilized world, however, begs to differ. Plus, there’s nothing to be proud of if you’re a Muslim. I’d call that a mark of shame.