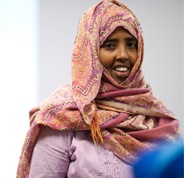 Is she wearing a picnic blanket?

Nothing is safe from sharia – not even community aquatic facilities. When Sahra Abdi and other San Diego-area Muslimahs told a local YMCA they couldn’t swim in front of men due to religious reasons, the facility capitulated to the 7th-century celebrants’ demand for sharia and began offering special hours just for the women to swim. The pool kicks all male staff and guests out before opening the facility to the women and girls. Most of the Muslimahs, Abdi included, are of Somali or Ethiopian origin. Islamic teachings regarding their haya (modesty) dictate they cannot show skin aside from their hands and faces to non-mahram (unrelated) men.

The Muslimahs enter the pool through the back door so as to avoid making contact with non-mahram men who may be stragglers exiting the facility. Many wear burkinis due to religious modesty issues. Abdi, the leader of the group, which is known as City Heights Hope, commented that the classes enable women to exercise because there aren’t any gender-segregated gyms in the area. She also noted that a criminal element kept the Muslimahs from walking in public parks, not to mention the heavy nature of the traditional Islamic ninja costume is prohibitive in the Southern California heat. Abdi added it was “really scary for them to be at the parks.” Uhh, I’d say ninjas walking around in broad daylight are far more terrifying than a dude playing frisbee with his dog accidentally bumping into you.

“Muslim people are not supposed to take our clothes through the dogs’ mud, it’s not clean,” Abdi said. She added that, because most dogs in east Africa are wild, many of the Muslimahs have some apprehension toward them. In Islam, dogs are considered nejis, or ritually impure. Something cute, cuddly, and loving being un-Islamic… why am I not surprised?

Despite the many positives coming from City Heights Hope, including lessons in healthy cooking, there’s an underlying element of sharia in many group members’ actions. Abdi has encouraged City Heights Hope members to become activist voices in the community. Of course, this means pushing for cruelly-slaughtered halal food in hospitals among other things. “People’s perspective of their rights have changed,” Abdi said, as though she and her fellow Muslimahs were entitled to halal food. No mention of the animal welfare issues involved. No mention of the possible cost or the acquisition issues, just demands. If you’ve been with YDM for a while, you’re probably used to reading about this sort of behavior from Muslims, but if you aren’t, this is commonplace. Expect more demands and more appeasement in the years to come.