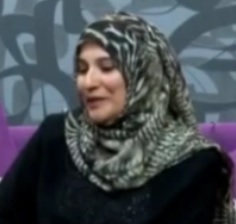 Naming your child Jihad is kinda setting them up for failure, don’t you think? Well, not according to the parents of Palestinian author Jihad al-Rajabi, whose literary works frequently address the Israeli-Palestinian conflict and the blood of those she considers “martyrs.” al-Rajabi was recently interviewed and allowed the ideology which inspires her peri-jihadist literature to take center stage.

“I say to the people of Gaza that they should raise their children on jihad ideology,” al-Rajabi stated. Trust me, they already are. Hamas and the Qur’an are making damn sure of that. Talk about f**king up an entire generation. “They should tell their children: eat, so that you will become strong and can fight the Israeli enemy. They should burn the midnight oil and invest all that is dear to them, in order to bring the others down to their knees. They should sacrifice all this for the sake of this pure soil, which we irrigate with the blood of the martyrs.” Really? Dedicating your life to fighting? Israelis don’t make it their entire life’s work to attack Palestinians. You only see such fanatical devotion coming from Islam.

“So I say: oh Arabs, oh Muslims, if you want the lord to provide for you, wage jihad with your blood, because blood makes the land and soil more fertile,” al-Rajabi continued. Yet again more discussion of violent jihad from the religion of peace… yet leftists and other apologists somehow still expect us to believe jihad is just an “internal spiritual struggle.” As for irrigating the soil with the blood of “martyrs” (read: suicide bombers and Hamas operatives) – I’m pretty sure water would be more effective. Just a hunch. There’s a reason people don’t practice bloodletting over their gardens. “If you want to see trees heavy with fruit, go to Jabal al-Rais and look at the lemon trees, which have been irrigated with the blood of mujahideen and martyrdom-seekers.” Perhaps those trees are flourishing because they are well-tended, or because of the climate? Hmm? Despite the lack of evidence for al-Rajabi’s pseudoscientific claim, Muslims still buy it. Seems like a parallel to their precious Qur’an…