Posted by Your Daily Muslim on September 12, 2014 in Anti-Semitism, Clerics, Israel & Palestine, Men 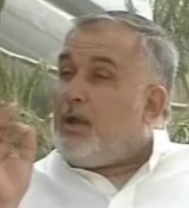 Some leftist “coexist”-believing idiot needs to remind Islam that it needs to fit into that narrative. As of right now, the religion of peace can’t exactly coexist with anyone else – just look at Palestinian Islamic cleric Bashir al-Ashi. A noted anti-Semite, al-Ashi recently gave a televised interview in which he tried to explain his belief that the Jews are an enemy of mankind. All he really did was show how warped the beliefs of his own religion are.

“The Jews are the enemies of the Christians worldwide,” al-Ashi began. “They are the enemies of the Americans and of all the nations, not just of Palestine and of the Arab and Islamic nation. The Jews are prepared to sow corruption in the world, and to ignite strife and wars between the nations.” The only wars Jews are allegedly “igniting” are the ones Muslims wage against them. As for sowing corruption, I’m assuming by that al-Ashi means “developing scientific breakthroughs.” Also, Jews aren’t the enemies of Christians – last I checked, it wasn’t Jews asking Christians in Iraq to pay the jizya or be slaughtered.

“All the nations need to understand that the most important thing for the Jews and their leaders is to appeal to the sentiment of their people by quenching their thirst for sucking the blood of others.” What is this, the late True Blood? Jewish people aren’t vampires. Of course, al-Ashi wildly throws this accusation without any expectation of being asked to provide proof. Just as with the Qur’an, Muslims don’t feel the need to provide logical and/or factual basis for their assertions.

“The killing of children brings joy to the Jews,” al-Ashi continued. “The Jewish people rejoice at the killing of children, women, and the elderly, at the uprooting of trees, the plundering of money, and the burning of lands. This is true of all of the Jews, of the entire Jewish people.All the nations of the world should know that sucking the blood of non-Jews and killing them is in the very nature of the Jews. After all, they are the slayers of the prophets.” If Jews rejoice so much at killing people, where are the widespread Jewish celebrations every time Israel strikes back at Palestine? Oh wait, it’s MUSLIMS who rejoice at killing people! Muhammadans around the world were seen celebrating and cheering after 9/11, not Jews. Muslims praise murderers as long as those murders were committed to protect their religion (see yesterday’s daily Muslim.) Not Jews.