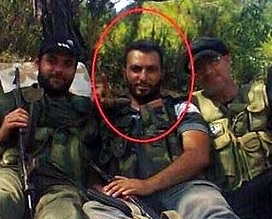 “This nation of la ilaha illallah [the Islamic shahada, or declaration of faith]… is like a lamp. Its fuel is the blood of the martyrs. Every time there is someone who is killed for this religion, this fire will only get stronger and stronger.”

Muslims often try to mask the beliefs and actions of their coreligionists by showing their positive qualities (when they have any.) Such as done for the “martyred” (read: killed) Australian sheikh Mustapha al-Majzoub, who died in Syria. According to his friends and family (and some idiotic pro-Muslim media outlets), he had traveled there to do humanitarian work… but we all know better.

During the years before he left on his final voyage, al-Majzoub had popped up on the radar of Australian security forces as a suspected extremist. His Facebook page is littered with Qur’an quotes, calls for the khilafah (Islamic state), and even pseudoscientific crap from Muhammad (pigs be upon him) that said “There is healing in black cumin for all diseases except death.” al-Majzoub also told his followers to avoid celebrating any non-Muslim holidays because they are “celebrations of the kuffar (infidels.)” Even April Fool’s Day wasn’t safe: “Be aware about what some people do on the 1st of April where they make lying such as APRIL FOOLS JOKES and say it is white lie, yet such lies are Islamically sinful.” al-Majzoub also gave speeches at radical hotspots like the notorious al-Risalah bookstore. When many other Muslims began to travel to Syria, the sheikh felt the call to join.

Once in Syria, his work wasn’t always humanitarian. He ended up in the province of Lattakia, perhaps with fellow Aussie mujahid Abdul Salam Mahmoud. Despite the relatively constant clashes with Syrian forces, al-Majzoub’s resolve remained steadfast, and he became the leader of a militant brigade. al-Majzoub and many of those loyal to him were blown up by a rocket.

After al-Majzoub’s death, his family released a statement saying, “Although it is a time of sadness, as we have lost a much-loved member of our family, we are honored that sheikh Mustapha died doing what he has been doing his entire life – selflessly serving the community for the sake of pleasing God.” Well, if you count leading a jihad terror brigade as something that pleases your god, then you have one messed-up deity.