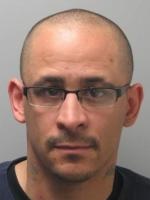 Missouri Muslim Mustafa Hussein bin Beyyette, born Theodore Barrett, has gotten a lot of media attention for all the wrong reasons. An activist in the city of Ferguson, bin Beyyette has been on the radio, live-broadcasting details of the racially-charged riots since the shooting death of Michael Brown. The left-leaning media has shared numerous quotes of his, such as “Since Mike Brown’s voice was taken from him, we are the voice of Mike Brown.” However, they haven’t shared the ugly truth: he’s a child molester.

bin Beyyette was convicted in 2001 of having molested a 12-year-old girl the previous year. He was 24 at the time. It is unknown whether bin Beyyette was inspired by 54-year-old Muhammad (pigs be upon him)’s molestation of his 9-year-old “wife,” Aisha. Thankfully, he was captured. He served his time and is currently free as a registered sex offender.