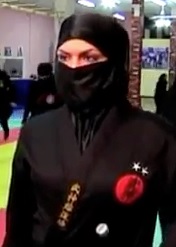 No image of Zunera Ishaq was available. However, this is probably pretty close to what she looks like.

Zunera Ishaq was brought to Canada from Pakistan by her husband in 2008. Now, she’s demanding Canada change its laws for her bizarre religious practices. Instead of being grateful for the opportunity to become a citizen, Ishaq put off her citizenship ceremony – because she wasn’t allowed to pretend it was Halloween and wear the traditional Islamic ninja costume, an oppressive garment she says she has worn since age 15, while taking the oath of citizenship.

All people who wish to become Canadian citizens (read: those too stupid to realize the USA is better) must take the oath of citizenship, which basically involves pledging allegiance to Canada. Oath-taking ceremonies normally involve dozens of people being in the room at once as each goes up and says a few magic words to become a filthy moose-humper. However, ninja-costume-wearing Ishaq refused to lower part of her veil so the officiant could see her lips moving during the ceremony, as is required of all taking the oath. Now, she’s filing a lawsuit against the Conservative party because the former immigration minister, a conservative, put the anti-ninja policy into effect.

Ishaq, who has joined a Facebook group in support of Islamist political party Jamaat-e-Islami, claims the ban on wearing ridiculous ninja costumes violates her right to express her religious beliefs, a right extended by Canada’s Charter. However, numerous parliamentarians disagree, citing that wearing a veil during the ceremony can be problematic since you can’t tell if a ninja’s lips are moving. “To segregate one group of Canadians or allow them to hide their faces, to hide their identity from us precisely when they are joining our community is contrary to Canada’s proud commitment to openness and to social cohesion,” wrote Jason Kenney, the minister who initially implemented the ban.

What do you think – should Ishaq be able to hide her face? Or should she be forced to briefly show it to take the oath, despite whatever religious obligations and/or self-image issues cause her to want to hide it?