He really needs to clean his room… also, I doubt FOX News is in line with his views.

Today’s daily Muslim is Lexington, South Carolina resident Nathaniel Hughes, who has more or less admitted support of the Islamic State terror group. What’s truly alarming about Hughes is the openness he displays when discussing his fanatical leanings. Though he has not mentioned any plans to join the Islamic State or carry out a jihad attack for them, his apparent ideological ties to the group are quite alarming.

When Hughes found the counterjihad page known as Izlam is Shit on Facebook, he and numerous other Muslims began trying to argue with the page’s administrator and fans. Hughes was generally non-combative until he revealed the true nature of his beliefs in what appears to be a veiled threat against Israel:

Why would he say such a thing? If he is trying to represent his allegedly “peaceful” faith, why would he boast about the impending actions of one of the world’s most aggressive terror groups? Here are some screenshots from his Facebook wall where he discusses his apparent support of the Islamic State. If he isn’t on a watchlist yet, he probably should be. 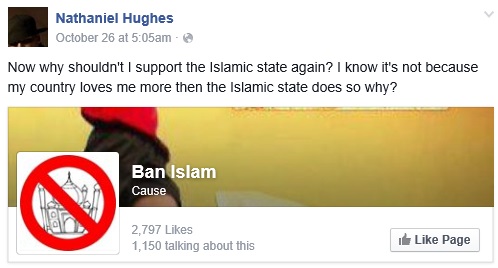 Lumping the beliefs of all Americans in with those of the Ban Islam Facebook page is a bit narrow-minded, don’t you think? 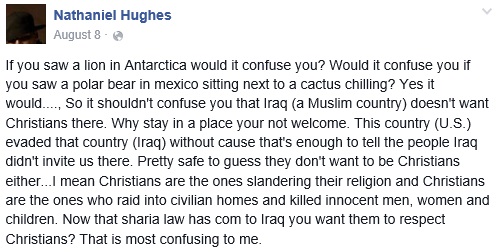 The crazy hyperbole is strong in this one.

Hughes uses the Qur’an to justify his violent, jihadist beliefs. A mushrik is someone who worships something aside from Allah in the capacity of idolatry/polytheism.

Of course, Hughes does not hesitate to condemn Israel, ignorant of the facts. I’ve totally never seen a Muslim do that…

And here, we see Hughes calling Islamic State terrorists his “brothers” in Islam. If the actions of the Islamic State are truly against Islam, Hughes would speak against the group. But what do we see? 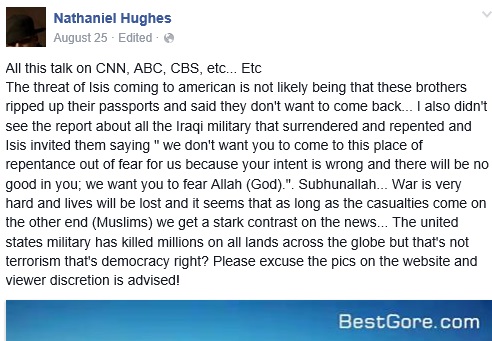 Allies, please share this piece. Make sure everyone knows about this potential threat lurking within our borders.