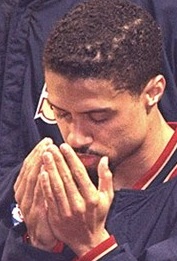 Mahmoud Abdul-Rauf, born Chris Wayne Jackson, played for the Denver Nuggets. His career plummeted after he took a bizarre stand – or, more specifically, seat. Instead of standing for the national anthem with the rest of his team, Abdul-Rauf chose to remain seated or stretch. Why? Because he is Muslim – and any form of national identity or patriotism is against Islam.

Abdul-Rauf received a one-game suspension for his refusal to take part in the ceremony everyone else was involved in. A compromise was reached where he would not have to put his hand over his heart or sing along, but could instead quietly pray in Arabic during the song. He also became known for covering brand logos on his uniform and fasting during Ramadan, even when that coincided with training or games.

What this tells us is that Muslims have an active incentive to not be patriotic – the power of Allah compels them to be sourpusses. Next time someone is reciting the national anthem or the pledge of allegiance, look at any Muslims in the area – they will likely not be taking part.