Posted by Your Daily Muslim on November 20, 2014 in France, Sexism, Women 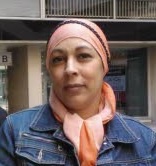 French Muslimah Hafida Treille got into some hot water with her employer due to her unprofessional conduct. Treille, a cashier at a supermarket, returned to her job after taking a few months off for maternity leave. That was reasonable, unlike her next decision. She began to wear the wear the traditional Islamic headbag upon her return. This repeated violation of workplace attire policy led to her termination from the supermarket.

Then, of course, the grievance-mongering began. She filed a lawsuit against her former workplace, claiming to have been discriminated against. The only thing that was being discriminated against was her faulty choice of garments – a non-Muslim employee who started wearing a balaclava to work would be promptly fired; this is no different. It’s a matter of adhering to professional standards, not discrimination. Being asked to follow the same rules as everyone else is not discriminatory; it ensures standards are upheld and makes for a more balanced work environment. Of course, Muslims can’t settle for that. They have an insatiable need for special treatment.

Unfortunately, an idiot judge awarded Treille 10,000 euros for her “offended sensibilities and humiliation.” Treille’s lawyer said, “this decision gives back her dignity.” There is no dignity in openly worshipping an invisible sky-demon named Allah who ordained a kiddy-fiddler as his prophet.