Posted by Your Daily Muslim on December 5, 2014 in Anti-LGBT, Men, Political Islam, Politicians, Pseudoscience, The Gambia 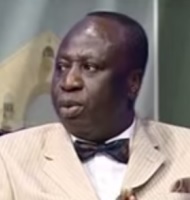 The Gambia is not known for being friendly to gays thanks to its Islamic faith. Even its president has likened gays to a plethora of viruses and has threatened gays with life behind bars if caught. Today’s daily Muslim, The Gambia’s Minister of Foreign Affairs Bala Garba Jahumpa (pronounced Ball o’Garbage Humper), hates gays as much as the nation’s president. Earlier this year, Jahumpa nearly died after a vehicular collision with a bovine. However, his near-death experience didn’t change his views. In a recent speech, he made numerous comments ranging from the spiteful to the truly delusional. In other words, the same old crap we’re used to from Muslims.

The Gambia is not particularly well-to-do, and international aid would be of great benefit to the nation. However, Jahumpa basically shot that possibility down: “We the government and people of The Gambia hereby make it very clear to the Union European and any outside bloc that wants to impose acceptance of homosexuals as a pre-condition for aid that we will never accept that conditionality no matter how much aid is involved.” Oh look, a Muslim actively opposing human rights. Still think that all religions are the same, left-wingers?

“Our country’s socioeconomic development depends only on the almighty Allah’s benevolence,” Jahumpa said, not realizing how idiotic that statement is. The Gambia is ranked as the 31st-poorest country in the world. Jahumpa’s invisible sky-demon is clearly quite benevolent. “We also hereby declare that The Gambia will always be an independent, dignified and Allah worshipping Muslim country where our way of life; our laws will be based on our Islamic values, that is, the strict adherence to our Islamic faith.” There is NOTHING dignified about denying people their rights. There is nothing dignified about forcing a religion on people whose nature it goes against. You know how many Muslims use that “there is no compulsion in religion” line to claim that no one is forced to be Muslim? Yeah, because being forced to live like a Muslim is totally different than being forced to be a Muslim.

“As an independent Muslim country, we will not be tied to any bloc that promotes decadence and ungodly behavior that are not only Satanic, but they are also detrimental to human existence, such as homosexuality; especially when it is used as a pre-condition for receiving aid.” Tell me again how homosexuality is detrimental to human existence? Was da Vinci a bad guy? How about Alan Turing? Us gays have always been and will always be. GET USED TO IT, Muslims.

Jahumpa then went further off the rails. “If the European Union is really interested in the protection of homosexuals in Africa as a human right; why are they slaughtering young and decent African migrants in their thousands on European soil?” Slaughtering young and decent African migrants? If such a thing were happening, it would make the news. It hasn’t made the news because innocent immigrants aren’t being massacred as Jahumpa stated. The few who are killed by police (European police are much more responsible and less violent than the American variety) are actively engaging in violent behavior. Jahumpa’s claim that European countries were violating immigrants’ human rights is devoid of factual basis (like his religion) and is a poor attempt to deflect from his own nation’s abuses.