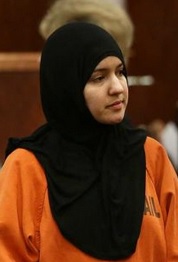 Nadia Irsan auditioning for Orange is the New Black

Nesreen Irsan, a Muslimah living in texas, met a Christian man. The two hit it off, and they decided to get married after Nesreen got advice from her friend Gelareh. As I’m sure you’re aware, Muslim women are not permitted to marry non-Muslim men.

Nadia Irsan, like her sister, also had an eye for non-Muslim men. She was enamored with one non-Muslim man, but he was more interested in Gelareh and Nesreen. The spurned Muslimah bombarded his phone with very haram pictures of herself, taqwa be damned.

Nesreen and the man’s relationship developed. Things first got violent when Nadia and her sister were driving to his house and Nadia couldn’t contain her jealousy. On the highway, the sisters began to physically fight, culminating in Nadia attempting to rip the keys out of the moving car and swerving toward an offramp guardrail. This crash is among the latest pieces of evidence (there are thousands) the Saudis are using to attempt to justify their misogynistic ban on female drivers.

Days later, the whole family held Nesreen hostage, attempting to keep her from betraying her faith. After she made Nesreen managed to escape, perennially-jealous Nadia again sprung into action. She filed a false police report, alleging her sister had stolen chemicals to poison her father. Nadia was not charged in this incident.

Nesreen’s father, Ali Mahwood-Awad Irsan, found and murdered Gelareh, whom he blamed for leading his daughter away from the fundamentalist Islam of her upbringing.

Next to die at Ali’s hand was Nesreen’s husband. However, Ali wouldn’t have been able to track him down were it not for Nadia’s assistance. Nadia planted a GPS tracking device on Nesreen’s car, which she used to repeatedly stalk both her sister and her brother-in-law. One fateful November day, Ali traveled to the couple’s residence after Nadia scouted it out. Nesreen was lucky she wasn’t home when the enraged Ali barged into her home and shot her husband to death.

These aren’t Nadia’s only legal troubles. She’s also in hot water for defrauding the Social Security Administration of at least $50,000 a year. She wasn’t alone in this plot – her stepmother and Ali had also been involved in its conception. Authorities found weapons, fake passports, and numerous forged credit cards at the family’s residence.

Nadia has not been charged with murder but has been charged for her involvement. Prosecutors are considering upping the charges. The family’s trial is ongoing.