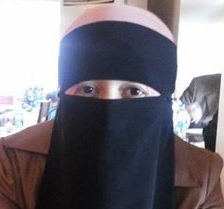 By now, this monster needs no introduction.

“It’s convenient for us to put the blame on others while in fact, we are partly at fault too,” rape apologist Salim wrote. “Remember that doesn’t matter if you commit a sexual act voluntarily or non-voluntarily, you should repent right away.” Salim is a monster for telling rape victims they need to repent because something terrible happened to them.

That wasn’t all she wrote that’s sure to have anyone with half a brain up in arms. “Of [course] your main priority is your husband but after you’ve served your husband, take care of the house, you can serve the society too. While your husband is out to work, with the permission of your husband, go out and contribute back to the society or gain some Islamic knowledge.” Really? You need your husband’s permission to leave the house or otherwise contribute to society?! And you still have the gall to claim that Islam teaches respect?! Marriage shouldn’t be about serving your husband; it should be about an equal partnership and mutual affection. Of course, the patriarchal religion of Islam does not share this belief.

Her thoughts on music are equally hideous. “Stop listening to haram music,” she told her readers. “It will change your life totally.” Uhh, yeah, it will change it – by making it infinitely worse. “I still remember an 11 year old girl asked me to search a song on YouTube for their campfire performance and I was shocked at the music video of Jennifer Lopez in tight skimpy clothes dancing on the dance floor.” Uhh, it’s easier to dance in skimpy clothes than the drapery Muslimahs like Salim wear. “These little instances made me realize how corrupted mainstream media is. I never want my kids to watch all that at the age of 10!… I’m a Muslim. Music shouldn’t be my life. Where are my priorities?” Clearly not on enjoying your life in the slightest.

The self-loather continued, “I began clearing my music library except for those ‘Islamic’ songs.” However, Salim then realized that wasn’t going far enough to satisfy her invisible sky-demon. She cited a prominent Islamic scholar, “If you notice that a student of spirituality is asking for permission to listen to samaa (religious songs), then this means that he still has spiritual defects in him.” Really? Listening to music means you have a spiritual defect? How? Music enables people to express themselves, vent their frustrations, and release energy. It’s often therapeutic. But of course, it’s haram because Islam has some weird grudge against fun.

“If people justify music by saying that music is Allah’s creations and it’s wonderful, then why do we lower our gaze when we see a handsome man or a beautiful lady? Aren’t they Allah’s creations too?” Here’s the thing: you don’t need to lower your gaze. You don’t need to deny your desires. There’s a reason you want to look at attractive people: biological impulses. If what is natural is a sin, then the allegedly omnipotent Allah f**ked up.

“So my advice to all those who want to stop listening to music, increase your knowledge on why Islam forbids music,” Salim wrote. “Understand the wisdom behind those prohibitions and you’ll taste the sweetness of Islam. That’s one of the reasons why I feel sad when people mix entertainment with Islam.” What sweetness? You mean being forced to fast for a month? Being forced to submit to your husband or be beaten (Qur. 4:34)? Being forced to wear ridiculous ninja outfits? There is no “wisdom” in the prohibition of music. Music is beautiful. Islam is oppressive.

Salim also wrote about her beloved pedophile prophet, Muhammad, pigs be upon him: “Rasulullah [Muhammad] SAW is the best interpreter of the Qur’an and his exalted standard of character (68:4) should be followed by every Muslim. Although it’s impossible to be like him, we can still try our best to emulate his characters. He did everything out of his love for Islam and not even once he did something based on his self interest.” Exalted standard of character? You mean “marrying” a 6-year-old girl and molesting her when she was 9? (By the way, Salim cites that story as a successful Islamic romance.) He never did anything out of self-interest, huh? Then why did he have 13 total wives instead of the maximum 4 he prescribed for followers his religion? Not to mention the various raids he and his followers carried out, including the capture and rape of sex slaves. That was all totally out of love for his religion, not because he was a sadistic, misogynistic warmonger who couldn’t keep it in his pants.

Not one to reject pseudoscience, Salim believes Allah doesn’t accept the fasts of women having their period. She also believes menstruating women are not allowed to read or handle the Qur’an, which is ironic because the Qur’an is one of the most bloodstained books of all time.

Salim also supports strict gender segregation. “During Rasulullah SAW [Muhammad’s] time, they even built a door in the masjid [mosque] specially and only for women so that the men won’t have to bump into the women. Look at how stringent they were about ikhtilat [gender-mixing].” How can anyone think that’s a good thing?! But of course, we must remember that Islam is totally compatible with our western society and respects women.

Her radicalization cost her friends, yet she failed to realize what a crazy freakshow she was becoming. “After the 360 degree change [to wearing the niqab], my life has became less fun and adventurous with the people that were like-minded like me left me,” she began. “Even my best friend, or I would call her my soul sister, couldn’t accept my change…” Unfortunately, Salim was willing to throw away tons of positive influences in her life because of her fear of an invisible man she never met. She felt she had to change her naturally extroverted personality to be more in line with the demands of her ancient patriarchal religion.

I often say Muslims are the greatest victims of Islam. Nurashikin Salim is proof of this.