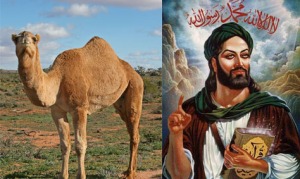 No picture of Kamel Mohammed was available. I did the best I could.

Ghana’s National Deputy Chief Imam, sheikh Kamel Mohammed, recently caused controversy when he shared his thoughts on same-sex marriage. Insecure in his own marriage, Mohammed believed allowing gays would have drastic societal consequences. Because marriages somehow affect people other than the parties involved.

Mohammed advised Ghana’s president to avoid legalizing same-sex marriage. He called it an “abomination in the sight of Allah” and “fight the president with their last strength” if he legalized gay marriage. Why? “To save Ghana from Allah’s anger.”

Mohammed claims the Qur’an says animals are smarter than LGBT people, though even that hate manual says no such thing. For someone who has allegedly studied Islam, he sure doesn’t know his shit.

“Muslim leaders, led by the National Chief Imam, will soon visit President Mahama and we will make it clear to him that as Muslims, we strictly detest same-sex marriage in Ghana,” Mohammed said. Hate it all you want, but remember, #lovewins. Progress is inevitable. “As Muslims, we shall fight against this eyesore.” Here’s the thing: the gym is gay church. We’re not eyesores.

Then Mohammed got violent, despite the fact that he follows what is widely lauded as a misunderstood religion of peace. “Such a person [homosexual] should be thrown from at least a ten-story building and whilst he is coming down, he should also be pelted with stones,” the savage stated, combining two murderous sharia punishments into a new pinnacle of Islamic sadism.

The ignorant cleric also blamed HIV/AIDS on gays, saying same-sex marriage is one of the causes of its spread. He then warned of more alleged “consequences” from Allah if gay marriage were legalized in Ghana. The US has had gay marriage for nearly a month now. No wrath of Allah.