“Know the Jews and you’ll know your enemy.”

Siddique has recently come under fire for his hateful remarks toward Jews (see above quote), women, gays, and the other usual suspects. He claims he has always stood up for the oppressed, yet doesn’t realize that to actually do so means not spewing anti-Semitic hatred.

Siddique has called upon people to “defeat, to destroy, to dismantle Israel, if possible by peaceful means.” Yes, because the words “defeat” and “destroy” totally have peaceful connotations. This comment on his Facebook details the depth of his anti-Semitism:

Yep, a tenured professor just referred to the holocaust as a hoax. Sadly, Siddique still has his job.

Speaking of the holocaust, Siddique can’t even decide whether or not Hitler was morally repugnant.

One of Siddique’s favorite Jews to target is counterjihad activist Pamela Geller, who organized a Muhammad (pigs be upon him) cartoon contest in Texas earlier this year. Two Islamic State (ISIS) supporters attacked the event and were sent off to their 72 virgins. Siddique’s comments about both Geller and the event are concerning:

CAIR, the Council on American-Islamic Relations, is a Hamas-linked group that routinely wages litigation jihad over incidents of alleged “Islamophobia.” Because it’s a mainstream group, it’s not crazy enough for Siddique’s tastes.

Siddique also reacted to the counter-protests that sprung up as a result of the cartoon event shooting:

You’d think an academic would formulate deeper opinions than “blame it on the Jews,” but Siddique apparently considers his opinion to be well-informed.

Of course, the Jews weren’t the only ones who experienced this absurd Muslim’s wrath. He also went after gays:

No religion is sacred? Ha! You mean no religion’s seventh-century idiocy is placed before human rights. Also, a Muslim taking the side of a child molester? Never would’ve seen that coming… *eyeroll*

“Reckless supporter of homosexuality” – I have no words.

Siddique has also expressed support for actions of ISIS.

Siddique’s most controversial remarks, however, were about the women who reported being raped by comedian Bill Cosby. 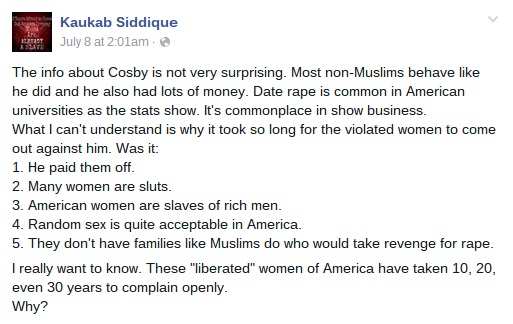 Really? Most non-Muslims commit rape? Uh, no, but your prophet (pigs be upon him) did. Your prophet molested a 9-year-old and told his followers they were entitled to “[women] whom their right hands possess.” (Qur. 23:5-6) Those women referenced are women captured in battle, and it is considered halal for Muslim men to use them as sex slaves.

“Many women are sluts,” Siddique wrote. Just because a woman is sexually liberated does not mean she’s willing. Consent is paramount. NO EXCEPTIONS. A woman being promiscuous does not justify her rape, nor does it make her less likely to press charges. Also, shaming women for their sexuality by calling them “sluts” is classless.

“Random sex is quite acceptable in America,” the Muslim continued. One, as if that’s a bad thing. Two, “random sex” and “rape” are not one and the same. Random sex involves the paramount ingredient: consent. Rape is an act of extreme violence. To claim the acceptability of random sex is a reason a woman wouldn’t come forward about being raped is intellectually dishonest at best.

“I really want to know. These ‘liberated’ women of America have taken 10, 20, even 30 years to complain openly. Why?” Uhh, because rape is traumatic, and coming forward can cause people to mentally relive the horror. Also, many would want to avoid the public scrutiny that comes with accusing a (now formerly) beloved celebrity like Cosby. Siddique’s reasons for the women not coming forward are incorrect, misogynistic, and defamatory.

When a Muslimah raised funds to help repair many of the black churches that suspiciously burned down this year, Siddique condemned her charitable efforts. Why? Because Muslims are apparently supposed to help their own instead of the kuffar:

Well, that was YDM700. It’s been quite a ride. 100 pieces remain until the grand finale. Thank you to everyone who’s stuck with the site – the best (worst?) is likely yet to come. Go vote in the Muslim of the Month poll if you haven’t already, and be sure to check back for new content!

I’ll leave you with this gem from this intellectual titan of our time.