Posted by Your Daily Muslim on August 28, 2015 in Anti-LGBT, Pseudoscience, United Kingdom, Women 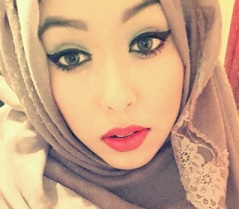 Here’s another Muslim who decided to air her hateful views upon the release of the Muslim Drag Queens documentary. Funny, because she looks like a sloppy drag queen herself.

WOW. “You can’t be gay and Muslim.” If you expect people to tolerate your invisible sky-demon cult, maybe you should tolerate them? Just saying, hate isn’t good PR. But she is right – it is next to impossible to be gay and Muslim… and survive.

I wonder why she’s getting hate… it couldn’t possibly because she’s an intolerant regressive who values an ancient child-porn fairytale over basic human decency.

Jinns are invisible spirits that eat poop and can possess people, according to the Qur’an. Somehow Ahmed expects people to respect her religion that believes in jinns and excludes gay people. I swear, the logic employed by those featured on this site has been going downhill… and that’s really saying something.